I got in!!!! Yikes!!!! Very excited. Need to get my presentation done ASAP!

March 26, 2016 ~ Charlie Goldthorpe ~ Leave a comment
So it was a hard few days in the studio. I think I’m just knackered from all the work lecturing and then finding 3 days worth of energy for physical making has worn me out a bit! I’m glad I did it though as I learnt some new processes, learned to work with new materials and regained some of my knowledge that I seemed to forget!
It was interesting working in the epoxy and although it hasn’t set on Tuesday it had by Wednesday so I managed to pull out a watch from a mould I had just done as had some left over from other tasks. It was actually interesting as I started o look at it more that this is a shadow of what it used to be being clear, however it still resembles the original. 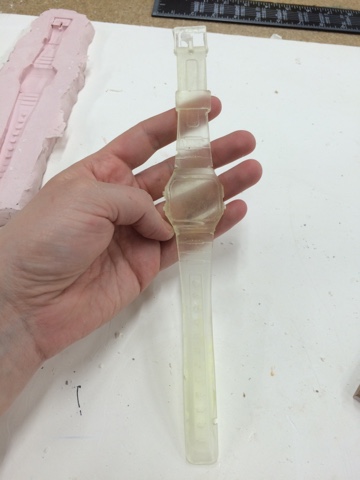 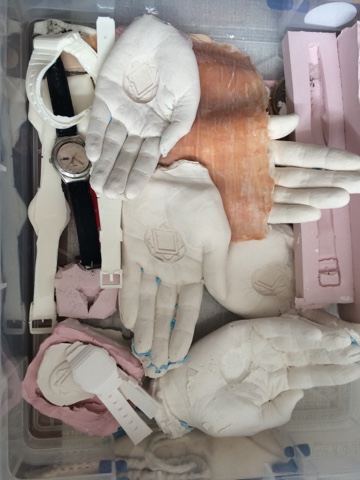 I put everything from the last 3 days in a box and there seemed to be a lot of done! The hand casts actually worked better the more I got into them and I’ll clean them up this week and add to here. Although a lovely object, I’m not sure if it’s what I want although could be an interesting side project. I’ll continue with the epoxy to see what results I get from putting over the face mould and see how that looks
March 22, 2016August 8, 2016 ~ Charlie Goldthorpe ~ Leave a comment

It’s been a frustrating day today.  A lot of the things didn’t go to plan and I was actually really tired, even though last night I slept well and was really excited about making again today!

The resin I had bought hadn’t set.  It take 72 hours to go off so that was really frustrating.
The alginate stuck to the plaster mould so it didn’t peel off in one piece.

I am actually too annoyed to write about it.  I think it proves that sometimes everything doesn’t always go to plan and mould making takes so long!

Here is a pic of the finished semi piece of the locket imprint…I was actually quite pleased with the semi result in the end!

On Friday I prepped a few bits and had played around on Thursday with casting my own hand and worked out how I was going to cast the locket into the hand.  This is the one that I produced, which I realised doing it the way I had been by laying the locket into the alginate mould directly made it uneven and hard to get in the right place.

So today I had a few things I wanted to attempt.  First of all I had poured silicone into my silicone moulds after spraying with a wax release agent.  They turned out so well and so detailed!  And didn’t stick to the mould!  These will be used in the new hand cast and also the arm piece when I get to that stage.

I also wanted to try experimenting with latex after an interesting chat with Natalie McCreesh as we have been discussing tattooing silicone.  I painted a few layers of latex on to a plaster base to create a piece of skin…I then wanted to try painting it onto Emma’s face cast and peel off.  It had exciting results.

And then lastly I wanted to use the faces for their original reason which was to cast with epoxy resin fabric over the cast.  I quickly came to realise that I will need an inverted mould to push down onto the top of it to get the fabric into the crevices, but I will have a look at the results tomorrow.

So it’s been a really good couple of days spending a few hours in the workshop.  I’ve wanted to have  a go at developing ideas of imprinting memories etc and so have ordered a fair bit of silicone, resin, epoxy and alginate to have a play with  (when it turns up).  This was my watch that I made a mould for yesterday and did some fast cast in today to see how it had turned out.  The mould was immaculate and so I plan to cast into it again and bend the watch inside out to use to ‘de-press’ into an arm so it looks like an inverted watch.

This is my hand….

Then whilst I was being helped to put the plaster bandage on it reminded me of the embalming process and how objects were buried with loved ones in ancient Egypt for travelling to the afterlife.  Embalming also reminded me of the tombs and shrines, leading back to the idea of the reliquary…

The alginate mould needed to incorporate the locket or the object to be imprinted into it.  I tried to mould brooches, lockets, purses, but the plaster wasn’t on my side so I actually used the real locket to imprint in instead.

Now I’ve worked out the process I feel I need to cast the hand as is, then make a plaster version.  Position the item that is going to be imprinted and flatten that area on the plaster mould.  Then recast in silicone?  Or Alginate and then add the item to the mould.  Then pour in the plaster or material to create the final piece.  I want to also try using the watch to embed into an arm…..

Hopefully tomorrow all my order will have arrived and I can have a go with the epoxy resin!  Wahoo!

Today I managed to nip into the studio on my lunch break and mend the nose of the plaster cast model to cast over on thursday or friday.

I also have sent off a conference review of the Creative Cut conference at the end of February this evening so feel quite productive.

Apart from having to spend £63 of my own money on materials to do my making I’m fairly happy.  I think I will be applying for money in June for materials and keeping my fingers crossed I get a paid residency or get onto the Wellcome Trust conference in Warwick as that is paid for!

Steve emailed and said I was doing well, so I hope I actually can get some stuff done over Easter.

I moved the love box from drama where I had got no responses to the Vice Chancellors office area!  I’m hoping there might be some stories from there!

So on Sunday 13th March, I conducted my first real interview out loud and not on a family member!  I have spoken to a man who lives in the village who wanted to get involved with the project and had a couple of stories to tell.

Having read a couple of books about methodology and interviewing techniques last summer I was conscious not to interrupt, prompt too much or lead the conversation and thankfully my participant let the story take him, with only a small prompt regarding objects.

What was interesting was the object he chose to remember a lost relationship (in this case a love who left him out of jealousy) was that the object was something that she took that belonged to him, however this is still an object that reminds him of the relationship (a wok).  It was interesting to make this a consideration in terms of how people remember a lost love using an object, that the object might not even exist to them anymore so it may be about re-interpretation of this object into an artefact too.

A Matter of Artefact
Blog at WordPress.com.